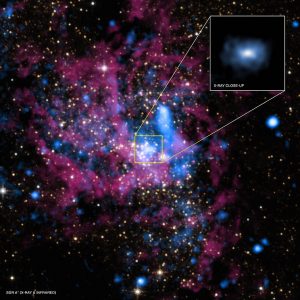 A few weeks ago, six telescopes, which use radio waves which make it possible to see through the dust cloud around Sagittarius A*, and which have been called “Event Horizon Telescopes”, have been stationed around the world in order to finally determine the nature of Sagittarius A*. One of these telescopes has even been stationed at the South Pole. The visibility of Sagittarius A* from Earth is considered to be so microscopic in size that a telescope 1000 times better than the Hubble Space Telescope, one of the largest and most versatile telescopes, is needed. Although the telescopes will most likely not be able to capture a photograph of the black hole, as no light can escape from it, the goal of this operation is to create a virtual image using the network of all of the telescopes, and at least capture an image of the glowing matter swirling around it, against which an imprint of its silhouette might be visible. If found, the black hole could put Albert Einstein’s gravitational theory to the test.

What makes this operation have more of a chance at success are the new observatories which have been introduced to the challenge of photographing Sagittarius A*; namely, the new Atacama Large Millimeter/submillimeter Array, or ALMA, and the South Pole Telescope. ALMA, which was built in a mountainous region of Chile, is considered to be “the most complex astronomical observatory ever built” due to its ability to collect an area of more than 71,000 square feet with the use of special dish antennae. According to John Carlstrom, the Subramanyan Chardrasekhar Distinguished Service Professor of Astronomy and Astrophysics at UChicago, ALMA is the key to the experiment. However, if this operation is proven to be unsuccessful, the inclusion of several more observatories, which are currently either being built or have plans to be built in Africa, the Pacific and in orbit, will hopefully allow for a clearer image to be taken of Sagittarius A* in due time.

1 comment for “The New Findings of the Sagittarius A*”