Take a paper and mark two points, let’s call them point A and B. These two points are analogous to two points in space-time.

Now, draw a line joining point A and B with a ruler. Measure the length of the line with a ruler. This is the shortest distance between the two points, which is the displacement. 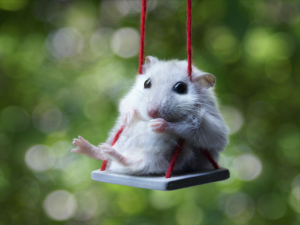 Consider a curious and adventurous hamster, Squeaky, who wants to travel from one point to the other. Let us assume that Squeaky travels with a particular speed; in order for Squeaky to reach the second point in the least time, Squeaky would tread along the line drawn on the paper. Squeaky has studied physics and will follow the shortest distance between the two points.

Now, unbeknownst to Squeaky, I will manipulate the paper in a way that the two marked points superimpose on each other after which I will take a pencil and penetrate it through the two points on the paper. 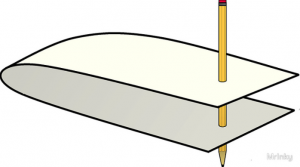 If Squeaky is still interested in going from A to B, Squeaky can jump in at A and reach B instantaneously or vice-versa. What has just been illustrated is an example of a wormhole despite the fact that Squeaky is, sadly, fictional.

A wormhole is a hypothetical feature of space-time that allows one to bend it to an extent that two separate points in space-time superimpose on each other. In this way, it becomes possible to travel from A to B instantaneously regardless of the distance between them. The term hypothetical was used in the basic definition as there has not as yet been evidence of a wormhole.

In order to further understand a wormhole, utilizing analogies made by Albert Einstein and Nathan Rosen, we will look at a wormhole as a ‘bridge’. Technically speaking, wormholes are referred to as Einstein-Rosen bridges, as they were first proposed by the aforementioned physicists in 1935. These bridges across space-time are believed to be possible due to the ‘bending’ or ‘curving’ effect that all massive objects have on space-time.

The proposition is as follows: two immensely massive objects are able to bend space-time to such a point that they would connect to one another via a bridge. In theory, this would significantly reduce travel time between the two points in the Universe, which could be billions of light years away or merely a few feet.

The passage between the two points could be a direct route, or a curved path that crosses through a higher dimension to the very distant “other side”. A curved two-dimensional plane is a helpful manner in which to visualize this scenario. When two objects of significant mass bend that plane towards the opposite side, a connection could theoretically be made.

The common retort to the conception of a wormhole is: If we have never found one, then how can ascertain that such a thing exists? Although this a valid objection, the calculations behind the existence of a wormhole, which I only wish to be able to demonstrate, show that wormholes are possible.

Thus, operating on the assumption that wormholes can and do exist, the question shifts to: when can we start using them? There are a few problems.

A central theory which attempts to explain how wormholes would form is based on the fact that a wormhole could form with two black holes as the ‘mouths’ of a wormhole, and the unknown centers of those black holes, and possibly their singularities, forming the ‘throat’ or passage between the two ‘mouths’. 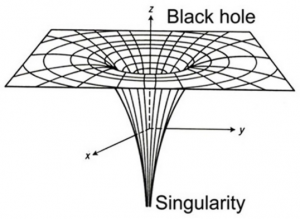 For the sake of simplicity, a black hole is a region where matter collapses to infinite density and where, as a result, the curvature of space-time is extreme. In addition, the intense gravitational field of the black hole prevents any light or other electromagnetic radiation from escaping. In the center of a black hole is a gravitational singularity, a one-dimensional point which contains a huge mass in an infinitely small space, where density and gravity become infinite and space-time curves infinitely, and where the laws of physics as we know them cease to operate.

The trouble with the idea of two black holes as the ‘mouths’ and the singularities as the ‘throat’ of a wormhole, is the seeming impossibility of ever being able to study the interior of that wormhole or ever seeing the opposite side, since nothing can escape the pull of gravity within a black hole, not even light itself.

Einstein-Rosen bridges present a fundamental problem because they collapse and disappear rapidly, so detecting, identifying and subsequently studying them is nearly impossible. Furthermore, certain theoreticians assert that wormholes might be occurring on a microscopic scale, flickering in and out of existence at a quantum level of existence that we presently cannot observe.

However, physicists have an uncanny ability to challenge impossibility by providing solutions. Considering the fact that the primary problem with studying and using wormholes is their size and short duration, if that issue could be countered, then progress could be made. Keeping that in mind, there is a theory that “exotic matter” could possibly stabilize a wormhole so that it could be used for a longer period of time, and provide more stability. Exotic matter is not the same thing as dark matter, but it does contain a huge amount of negative pressure and negative energy density. This type of matter has only been seen in limited, vacuum-state experiments, but if it were naturally or artificially added to a wormhole, it is theorized that the wormhole could be made wider – and even kept open – so that space travelers or equipment could be sent through.

Beyond that, it is predicted that there would be massive amounts of radiation at the mouth and singularity of certain wormholes, which would prove to be instantly fatal and would destroy anything that approached it. The intense gravitational forces would also likely rip any ship or human to shreds before they could pass through the wormhole. If a black hole can rip apart a star, I cannot and, frankly, do not want to imagine what it could do to a human being.

When there are two massive objects or two black holes, even if they are connected, a hypothetical observer would be stuck inside because from both sides gravity is attractive. This is precisely why, as noted by Kip Thorne [the source of a majority of the information provided above], we need “exotic matter” which is known today as “negative energy”. This energy could, hypothetically speaking, make the paths that begin from within the wormhole not only diverge but also, in turn, lead the observer to the other side. At this point, I would like to bridge the connection between the content discussed above and a paper by our Professor and Professor Ken D. Olum. Their paper explores energy conditions.

As we have explained, in an extremely basic manner, that negative energy is required, it is indispensable to note that there are certain restrictions on it called energy conditions. The average null energy condition, as discussed in Professor Kontou and Professor Olum’s paper (which is cited below), tells us that if we calculate the energy along a complete path (a path that goes through a wormhole), it cannot be negative. This has been proven for certain kinds of matter; however, there are still complications in relation to wormholes.

Wormholes connect two points in space and time. Theoretically speaking, the existence of wormholes would allow for time-travel and thereby violate causality. The difference between the science-fiction author and physicists is that the latter do not simply accept violations of causality – which is good news for us all!