Group B: Why Fanfiction???

by Preston Gittelson on November 3, 2016 in Response posts • 0 Comments

Shows end, right? Books have a last page, no matter how big the series. Video games end at a certain level. People write fanfiction about stories and worlds they are invested in, even when canon content stops or slows down. Many of the fandoms where there is a lot of creativity has a big, open world ready for exploring. Harry Potter? Transformers? People create fanfiction to continue, explore, or add onto, their favorite stories. The fanfiction, which people write is known as fanon, or the fandom. You are only limited by your ideas. Fanfics serve as an outlet for the imagination of the fans of a particular  book, TV series, film or any other medium of fiction. People write and read fanfics when they just can’t have enough of the things they’re fans of; they need just about any means to engage with them. A common motive behind writing a fanfic is to write down a certain scenario that a fan strongly wished it occurred in, say, a TV show, but the said scenario wasn’t a part of the script, to the fan’s disappointment. Putting the imagined scenario into words gives a sense of satisfaction to the fan; he or she gains satisfaction to some extent at the thought of the scenario unofficially taking place at least somewhere if not within the official script. Subsequently, the other fans who might have consciously or subconsciously wished for the same or a similar scenario to occur garner pleasure out of reading the fanfic. Fans have their own ideas of what should happen. They have their favorites. They want to read more, and fanfiction fulfills those desires. 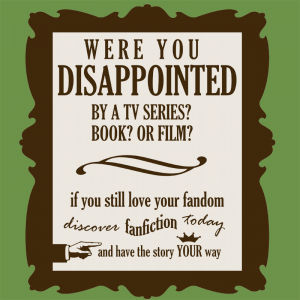 ← group B: fan culture as a metaverse
Electronic Torture →