by Sadie Schiffman-Eller on September 13, 2016 in Response posts • 0 Comments

In reading Olia Lialina’s “Vernacular Web 2,” I was particularly struck by her interest in the shift of the Web towards a more professionalized, formalized, template-centric platform that fosters a distancing between the Web and its users. Throughout the article, she highlights many ways in which the new, or ordinary, users of 2007 were taking part in, as well as being guided by, the evolution of a “routine and taken-for-granted”(18) Web experience. Home pages became sites expressly designed for the purpose of exposing “yourself to the world simply and effectively,”(4) which came at the cost of user understanding of the “accounts,profiles, journals, spaces, channels, or blogs”(5) that they were creating. Ordinary users were, and still are, no longer expected to comprehend, let alone take part in, coding on the Web. Instead, we are given “almost perfect tools and services at [our] disposal”(2-3) which allow us to create sites, or more often profiles on sites, that have pre-established structures rooted in a certain formality and hidden in materiality.

In his essay, “The

Medium is the Message,” Marshal McLuhan argues, that the content of a medium is an illusionary and hypnotic element that ultimately “blinds us to the character of the medium”(9). Through her content-centric examination of the Web, I believe Lialina rejects this claim and presents a case for content, and the content behind this content, as key to an understanding and proper usage of this highly convoluted medium. That being said, she does take note of the fact that a majority of the Web’s amateurs in 2007 were a powerful group constantly publishing to the Web but remaining “rather indifferent to the Web itself”(3). Here, I think she is pointing to the potential of content apart of the Web to confirm the “Narcissus trance” that McLuhan believes to be our soporific fascination with the extensions of “our own being in new technical form”(15). But, I would argue, that her text ultimately facilitates an awareness of our lack of awareness on the Web and of the content that has built it. She frames her analysis in terms of early amateur usage and professionalized development of the medium: advocating for an understanding of the symbolism of the Web’s specific qualities and their evolution in terms of content.

MySpace is brought up within the article as an emerging site that maintains ties to “HTML-aesthetics” while also reflecting the shift away from personal home pages. This content-related tension is especially illuminating when looking at what MySpace has become today. My personal associations with this site revolve around the its original promotion of rudimentary coding. What MySpace allowed you to do that FaceBook didn’t was directly involve yourself in the creation of your page via code (quite similar to what we performed in making our “About Me” pages). Now, MySpace has conformed to a much more compartmentalized layout that restricts user freedom from being as involved with the code of their page and actually promotes a “user friendly” interface that has lost most of its HTML aesthetic: https://www.youtube.com/watch?v=_uASlmdrtqk. Older profiles have been sifted out: resulting in the link to Lialina’s 2007 MySpace page (provided in the last line of her article) one that leads to a site that no longer exists: it’s no longer her space. Looking at the transformation of MySpace, in terms of its content, surfaces larger issues regarding the effects of professionalization of the Web and its subsequent aesthetic, physical, and psychological dictation of our Web experience.

Lialina’s incorporation of comments and excerpt from Danah Boyd’s “American class divisions through Facebook and MySpace” also prove to further her defense of Web content analysis. A comment made by Tom Moody, in response “to the announcement of Vernacular Web 2,”(6) raises the idea of “class elements at work”(6) on the Web. His questions and insight relate both to Boyd’s interest in “classed aesthetics”(17) and Lialina’s views on the aesthetic influence of “contemporary electronic gadget design”(9) on the professionalized Web. All three of these perspectives share a common thread: monetary influence and control over content.

pple; saying that it imitates their “cool and expensive candy-colored plastics”(9). This quote is extremely interesting and terrifying in its unveiling of Apple’s hold on mediums (or devices) outside of their own and their ability to instill an aesthetic psychology that feeds and dictates our experience of the Web. What does it mean that the aesthetics of the Web are governed by companies such as Apple, whose iPods and iPhones were, and still are, not monetarily accessible to lower-income individuals? Does their design influence on the Web fuel their own product’s aesthetic appeal to the masses through subliminal online tactics? How is this content crucial to our grander understanding of McLuhan’s assertion that “the effects of technology do not occur at the level of opinions or concepts but alter sense ratios or patterns of perception steadily and without any resistance”(18)? 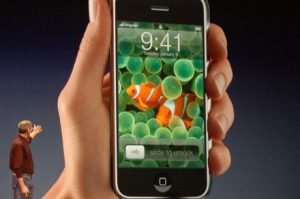 ← Language, Writing, and Introspection
When the Medium Throttles the Messenger: The New Web and Media Literacy →