by Nick Shenberger on September 19, 2016 in Response posts • 0 Comments

In Julian Stallabrass’s Negative Dialects in the Google Era: A Conversation with Trevor Paglen, we get to view an in-depth analysis of Paglen’s unique artwork as well as his thoughts on art in general and it’s relationship to the increasing technology.  A specific portion of the article focuses on Paglen’s thoughts on “Politics of Production” (Stallabrass, pg. 7).  This idea is something I find intriguing not only for my own interest but as it seems to be what is coming into culture and society today.  The “Politics of Production”, as described by Paglen, refers to “the relational practices that are behind the work and go into its making.” (Stallabrass, pg. 7) also known as what happens behind the scenes of a piece of art.  In this case, Stallabrass and Paglen mostly refer to the images that Paglen produces to describe the “Politics of Production”.

On a personal note, as I was reading the article this part struck me mainly as I like to be more involved in artwork or photography or really anything that I look at.  I can take the time to view a piece of work but in the end my mind wanders to how it may have been completed.  I like the background information, the who, what, where, when and why behind works.  I really strive to look for the how though.  How is it that someone decides and then puts into affect this piece of art or this photograph?  What was it about their surroundings that made them chose this moment to take a picture?  It’s these aspects that I believe I can learn the most from and often fascinate me more than the artwork itself.

Paglen transfers his “Politics of Production” to describing a bit about documentary photography and media.  This is where the article relates so close to current society.  It is quite often that a day or an hour after watching a documentary, I’ll see something that reminds me of what I just learned and suddenly I’m spewing out information to anyone that will listen.  I know personally, many of my friends to the same thing. The increase in documentary media in the 20th century and even recently has created a new process that develops learning through media and consequently from human to human.  Many of the best documentaries are about things that are so unheard and so interesting that once you watch it, you want to tell everyone what you learned.  It’s just like a new piece of gossip only most of the time its the behind the scenes of the gossip (if that doesn’t make it anymore exciting I’m not sure what will).  In fact, some of the time documentaries are actually just gossip.  Paglen says documentary photography “has clear limits” (Stallabrass, pg. 11) and he dictates, ““documentary” images can still become social facts regardless of their ability or inability to reproduce reality.” (Stallabrass, pg. 11).  It’s because of the inability to reproduce reality, even though it could be really really close, that documentaries and documentary artwork can act like gossip.

So what does Paglen do?  Well he has his rules.  Make a truth claim, contradict his truth claim, suggest a way of producing his image and finally make it all out to be an allegory (Stallabrass, pg. 11) are the ways that Paglen produces his images.  He uses the factors of documentary artwork to create a new medium that involves both the truth and a lie.  The abstractness that he involves is a level of media that perhaps combines the best of both worlds to get a bit of gossip and some of the real stuff too.  Maybe that’s what makes it quite juicy??  Whatever it is, it seems to be working and this article really raises to question the work behind art and it’s place in society and maybe even in new media. 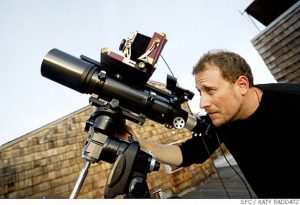 ← Group B: Gramophone, Film, Typewriter and the Challenges of Media
Group C: Art and Reproduction →