This course offers a foundation in media history and theory, with a focus on how to use aspects of traditional humanistic approaches such as close reading and visual literacy to critically engage with both “old” and “new” media. We examine how new media interacts with and transforms culture by considering the emergence of digital media and internet culture in relation to prior moments of media change, and discuss how such shifts have continually re-shaped our perceptions of time, space, publicity, knowledge, and identity.

The premise of this course is that the new-ness of new media can only be approached against the background of humanistic experimentation and imagination with both old and new media. We read key media theorists (Walter Benjamin, Donna Haraway, N. Katherine Hayles, Henry Jenkins, Friedrich Kittler, and Marshall McLuhan), as well as contemporary fiction by authors such as Neal Stephenson and Gary Shteyngart that offer speculative visions of how digital media and human experience might determine one another in the future. As part of our ongoing examinations of how material conditions shape discourse, we assess our own positions as users, consumers, and potential producers of media.

Intro to Media is one of the two core courses for the Experimental Humanities concentration. This means that we take on ambitious theoretical readings and embrace the ethos of “practice” and “making” as we consider what constitutes humanistic essays now, how they use and reflect upon “old” media, and what forms they might take in the future. 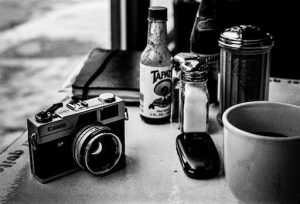 We are working towards:

• Becoming familiar with major theories about the relationship between media and human experience, especially since the rise of electronic media but also in earlier moments of technological change

• Exploring how different practices and media forms can affect learning, expression, argumentation, and analysis; experimenting with this through several hands-on projects

• Close reading literature to unpack social hopes and concerns about media use in the American context; engaging this analysis with media theory to make well-supported arguments in essays