Familial bonds today are strained by the fundamental idea of the nuclear family which supposes that the condition of inhabiting a home together and being raised by the same or common individuals nurtures qualities in the members that allow them to connect and sustain relationships. Interlocking this is Locke’s proposal from the Second Treaties that fundamental to human coalescence is rationality, that is understanding and knowledge, not the inherent nature or socialised being of an individual. The family or household reinforces this by placing proximity of life and its emergent understanding over the potential of the individual to develop outside the home and possess emergent idiosyncrasies that place them at odds with their family. The expectation of the family unit to support and accept one another ‘unconditionally’ imposes stress on those in families where this is not the case. The portrait of the family in the United States, as bounded by blood, monetary lineage and supposedly altruistic care, leaves little room for the versatility in lived experiences that members of a family are privy to. This variance results in members being better or ill adapt to attend to or comfort one another and results in an artificial commonality.

In response, I propose a household or rather home to attend to this trauma. Where permanence is not a precursor, but members are together for a time before leaving one another and thus are encouraged to inquire, learn and listen while together; as opposed to supposing they’ve already done these things by nature of being closely associated over a prolonged time. The household’s utopian impulse is comfort and transition which are assumed to give rise to an ontology of beauty. Security or comfort of stasis as the Violet Sister, Octave-Violette describes in her pamphlet Every Society invents the Failed Utopia it Deserves, is achieved through familiarity over the three to four year period of dwelling together and reciprocally the power of flight is incubated so that members are optimistic about change. Recognising the historical pattern of utopias or communes to exist temporally, perhaps it is necessary to design one such community, or dwelling model that is designed with its own temporality in mind and stresses this to its members.

This requires an emphasis in design on change, inquiry, clarity and the individual. 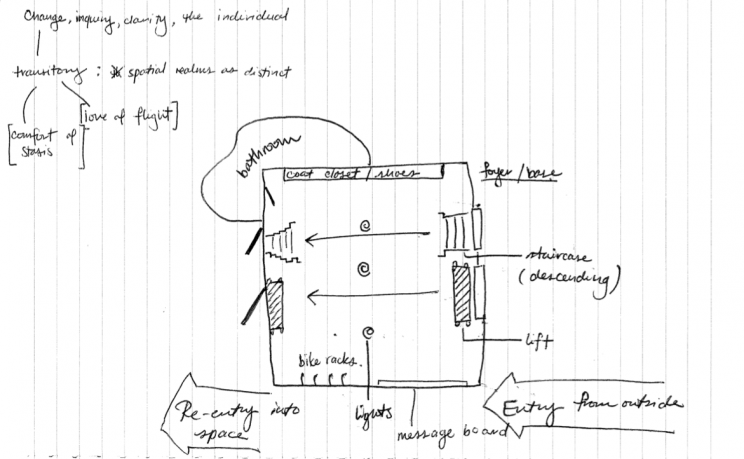 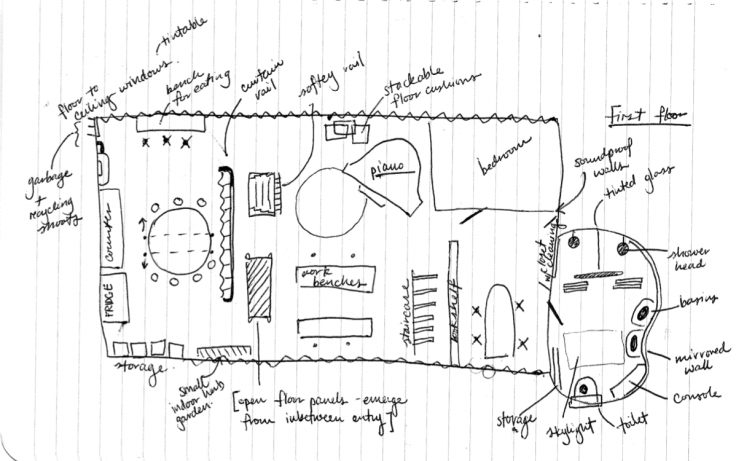 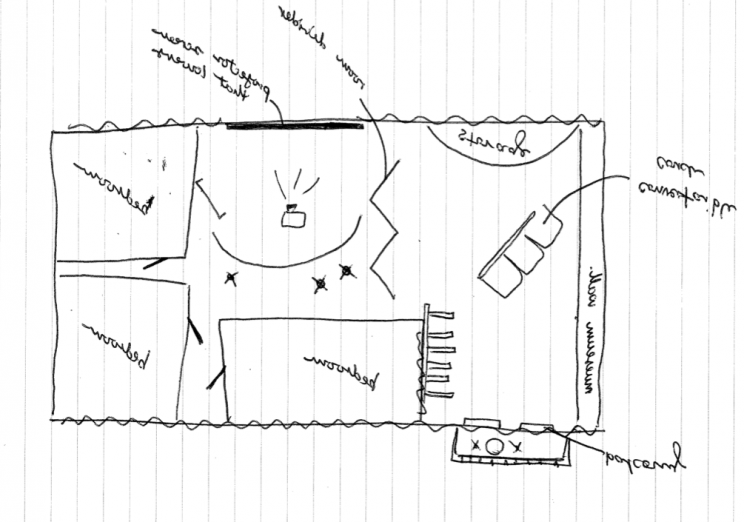 The flat or apartment is a three story extension. The first floor is sub-terrain so that entry and exit from the household reinforces the idea of the public and private realm and the home as a sacred space. This foyer is well lit and wheelchair accessible via a repurposed industrialised lift. The foyer also acts as an interim and allows members of the household to debrief, remove shoes, read the notices on the message board and relocate themselves within the home. The message board brings the individual back into a communal space and reminds them of the importance of dialogue. This is important in establishing the comfort of stasis. Additionally, given the homes position within a metropole adds a layer of security.

The apartment is open plan and features movable and versatile dividers to allow the space to be changed for purpose and preference by the various iterations of occupants. The flat’s bathrooms are organically shaped to reemphasise beauty in design and recognise the role that beautiful design plays on the esteem of those inhabiting the home. To the same effect the lay out is minimal and offers ample storage space considering occupants are expected to be coming to the flat from a previous life with previous belongings and leaving into another. The adjustable dining table, stackable floor cushions and convertible couch are all examples of ways that the space can transition and be morphed as well as accessories towards socialising. The glass surroundings ensure the inhabitants are constantly reminded of their positionally in the city, however the windows can be tinted for privacy. The emphasis on transparency further upholds the general ethos of truth and clarity in the home. The decision to have the stairway and lift in non-enclosed spaces leading to the first floor ties into the ideology of easy transition. In line with this, the second floor’s ‘museum wall’ is so that occupants of the home can leave their mark and reflect on those that have come before them. Acknowledging that just because something is temporary does not make it less significant. 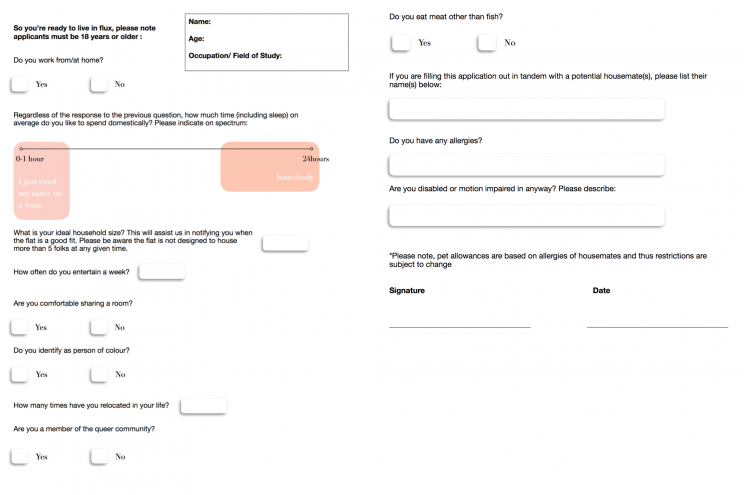 ← Communication and Community
The Crisis of Humanity →