A Utopia With Some Robots In It

Put simply the problem is involuntary labor or what I am calling compelled labor.  Labor which is not necessarily forced in the sense that one is not given the choice of whether or not they will do it but compelled in the sense that one works because one must and not because one wants to.  The labor is done because it is necessary for the individual, often because one needs money live in our society.  The problem is that people end up doing things because they have to not because they want to.  This is also bound up with the idea of labor that is necessary for society.  There are many things that a society needs to function, food being an obvious example, that people must be either forced or compelled to do.  If one were to ask all of the peasants in medieval France whether they would chose to work on a farm their entire life many would probably have said no.  However their society was one where people were made to the necessary work of farming and there was much suffering and inequity because the people who made and extracted the basic needs of that society from the earth were compelled to do so.

In my new utopia all societally necessary labor is automated and performed by robots (that are not intelligent or capable of feeling anything, no moral problems can be incurred by their use) that are directed by humans.  All of the food and raw materials that my utopia needs are produced by robots and all of  the things that my utopia needs can be made by robots.  Thus no one needs to work for the basic necessities of life because they are provided by automated labor.  The only task that humans must perform in order to survive is oversee the robots and manage their labor.  People are thus free to do what they want and also free to have much more leisure time than most people do now.  The inhabitants of my utopia are also free to sleep more and determine their own schedule for that sleep because of the completely voluntary nature of their work.

The people of my utopia work at whatever they want to whether that be chemistry research or trying to create the world’s greatest garden containing only different types of grass.  They determine what they want to do based on what they think is most important one person might do what they think is most beneficial for society as a whole and another may do what they think will make them personally happiest.  The work that the people of my utopia do is also better because it is voluntary.  When people do things it is because they care about the work and want it to succeed.  The reason for working is the work itself and not something external to it.  The efficiency of much of the automated labor means that people have ample materials with which to work.  The scientists of my utopia will have easy access to all the equipment and materials they need and all other professions will have similar resources.  Robots will also be able assist people with their work allowing them to not only chose to do the work they wish but also in many cases avoid parts of that work that they see as boring and which are simple enough for a robot to do.

There are two primary functions of the government of my utopia.  One is to provide services that the entire society needs, think roads, electricity etc., and to oversee the activities of automated labor that works to satisfy societal needs.  For example while and individual might have a farm with an amount of automation that fits their desire the government will control enough automated food production to ensure that every one can eat.  The other primary function of the government in my utopia will be to resolve disputes between individuals and act in a law enforcement capacity.  However due to the utopian nature of my utopia there is almost no crime and few disputes.

As the day begins a robot harvests wheat and sends it by automated train to a mill be ground into flour.  The wheat is taken and ground into flour in an entirely automated process.  While the grinding is in process the manager of the mill, an early riser, checks to make sure the process runs smoothly and checks the product’s quality.  The finished flour is later sent to a city where some is delivered to a bakery also by automated labor.  An inventory management robot then places the flour in the proper storage and updates the inventory.  The baker then uses the flour to bake things.  The baker, after closing the bakery, decides to try and see if they can acquire flour made from chestnuts and the next day a robot prepares to collect some chestnuts. 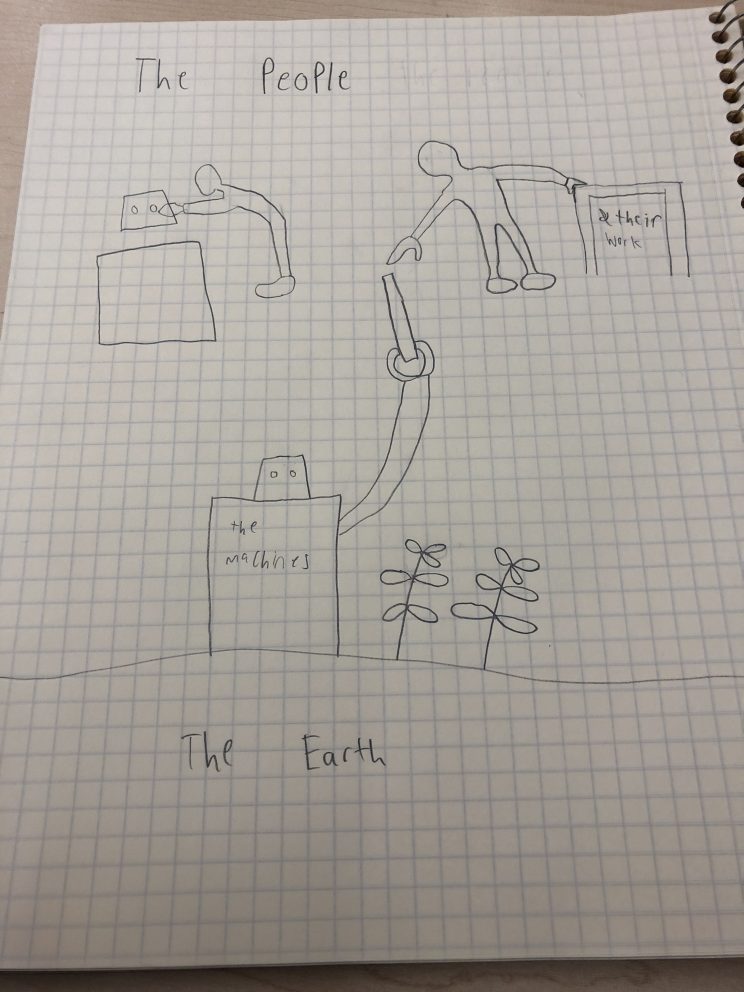