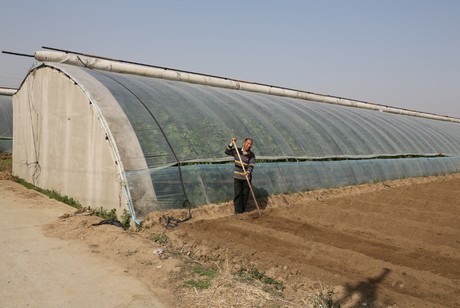 Above is a picture of a greenhouse model used widely in areas of China. In a 2015 article by LowTech Magazine, it was reported that there were at least 1,977  of these greenhouses in China. This model is low-cost and does not involve fossil fuels for heating. The transparent part can be made of plastic-foil, which is much cheaper and insular than glass. There are typically three walls surrounding the greenhouse, one of which is seen in the picture above. These walls are made of particularly insular material such as brick or certain types of rock.The three walls and accompanying material retain heat very well and release it at night when the sun is not heating the greenhouse.

There are other forms of natural insulation that this model uses. Typically, these greenhouses have what can be called a massive “blind” to cover the transparent exterior. This serves as an extra layer of insulation during the night time. 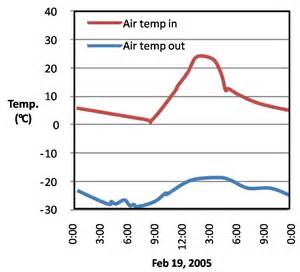 The above graph that will accompany the picture illustrates the temperature inside and outside a Chinese passive solar greenhouse in Shenyang, China in February 2005. The lowest temperature that the  interior reaches is 0 degrees Celsius (which translates to 32 degrees Fahrenheit). This particular area of China gets slightly colder than the Bard area; it would be classified as a Zone 5a based on the USDA Hardiness Zone Map. Annandale on Hudson is classified as a zone b area. In other words, the information collected on the interior temperature of the greenhouse in Shenyang might be applicable to a greenhouse of a similar nature in our region. Hardier plants such as leafy greens (which would be the primary produce grown in my proposed greenhouse) can grow in temperatures 30 degrees Fahrenheit and higher. Some backup heating system in case of freezing temperatures would be necessary in the colder winter months. Otherwise, the natural heating of this design should suffice to grow hardy vegetables for Kline.

This style of greenhouse is dubbed “active solar” because it requires labor for the “blind” I previously mentioned. This will not be an issue however since I am proposing that the greenhouse be managed by work study students.