by Gretta Tritch Roman on February 9, 2016 in Tutorials

Whereas pictures can be satisfactorily represented in two dimensions on a computer screen, space — especially Gothic space — demands a different approach, one which embraces not only the architectonic volume but also time and narrative. Mapping Gothic France builds upon a theoretical framework derived from the work of Henri Lefèbvre (The Production of Space) that seeks to establish linkages between the architectural space of individual buildings, geo-political space, and the social space resulting from the interaction (collaboration and conflict) between multiple agents — builders and users. Our intention has been not just to develop a more appropriate way of representing the spaciousness of individual monuments, but to provide the user of the site with new ways to understand the relationship of hundreds of buildings conventionally described as “Gothic” — in terms of sameness and difference, found in the forms of multiple buildings within a defined period of time and space that corresponds to the advent of the nation of France.

Mapping Occupation: Force, Freedom, and the Army in Reconstruction

Gregory Downs and Scott Nesbit, U of Georgia
http://mappingoccupation.org/

Mapping Occupation reorients our understanding of the Reconstruction that followed Confederate surrender by presenting new views of southern political space.  It argues that U.S. power existed where the government could enforce its laws through the Army.  Army installations formed the centers of patchwork zones of occupation.  These zones were linked and extended by the southern rail network as the Army responded to political pressure and events on the ground. Mapping Occupation also visualizes the more limited areas from which black southerners could reach soldiers, highlighting the unequal geography of the Army and the civilians who used it to assert their rights. Viewers can use these maps as a guide through a complex period, a massive data source, and a first step in capturing the federal government’s new reach into the countryside.

Mapping the Catalogue of Ships

Mapping the Catalogue of Ships demonstrates that the arrangement of the Catalogue, far from a random list of place names, corresponds to the natural geography of Greece. We offer you here a window into our ongoing work to evaluate Homer’s knowledge of ancient Greek geography and his use of that knowledge in the organization of the Catalogue. While the poet’s recitation of the three contiguous routes around the Greek world demonstrates a large-scale, contingent-by-contingent geographical knowledge, we suggest that the Homer also frequently demonstrates a detailed awareness of the physical distribution of sites within those contingents, which he takes into account as he composes. 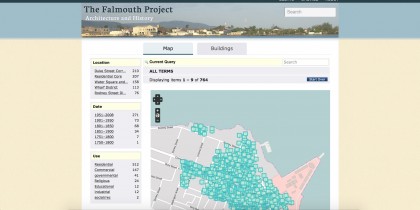 The town of Falmouth Jamaica has one of the richest collections of historic architecture in the Caribbean. This web site, the product of ten years on-site research, is a window into that architecture and its history…The Falmouth Project is an online geo-spatially accessible archive of information about the historic architecture of Falmouth, Jamaica…The archive includes information on the 764 buildings that fall within the boundaries of the historic district. Every building in the archive has a full PDF survey report that includes a summary of the building’s form and materials, a supposition about the building’s date of construction, an assessment of the building’s condition in 2008, and a photograph and approximate footprint. Some of the buildings have been investigated more thoroughly and have more extensive building histories available as well. The archive is searchable via the map, where you simply hit the icon positioned in the location of the building of interest. Or you can delimit your search by region of the city, date of construction, and building use. 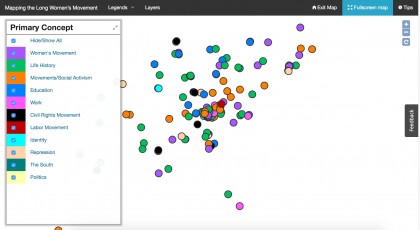 Mapping the Long Women’s Movement is an experiment with indexing, using, and ultimately understanding oral history in new ways. The project began with the Southern Oral History Program’s work on the “long civil rights movement,” an approach to civil rights scholarship that posits the movement as longer, broader, deeper, and more diverse than it is conventionally understood. That approach took researchers to eastern Tennessee, where over three years they conducted interviews with dozens of people who became grassroots and labor activists, blazed new trails for women, or simply took charge of their own lives in dramatic ways. As they worked in their communities—forming consciousness-raising groups, establishing health centers, opposing environmental degradation, and working for civil rights and gender equality—they joined networks of activists and created new spaces where women (and some men) could work for change.

Recovering Hayti is an ongoing collaborative project being undertaken between the Digital Innovation Lab at the University of North Carolina at Chapel Hill and Preservation Durham, a local historical preservation society whose mission “is to protect Durham’s historic assets through Action, Advocacy, and Education.” Using DH Press, a digital humanities toolkit developed by the Digital Innovation Lab, this project maps the lost community of Hayti, which was largely destroyed during the Urban Renewal efforts of the 1960s.

This project maps Lebanese households in select North Carolina cities from 1900 to 1930, allowing visitors to explore the geography of Lebanese communities and learn more about Lebanese immigrants, their families, and others—such as boarders—with whom they lived. Additional features—such as Household Spotlights—delve deeper into the stories of particular families, providing narratives of their experiences as immigrants in North Carolina in the early twentieth century. A project of the Digital Innovation Lab at the University of North Carolina at Chapel Hill, Mapping Early NC Lebanese Households was created in collaboration with the Khayrallah Program for Lebanese-American Studies at North Carolina State University. It is both a website and an interactive digital component of Cedar in the Pines, an exhibit opening at the North Carolina Museum of History on February 22, 2014 and running through August 31, 2014.

Dr. Whisnant and Dr. Lach designed the Unbuilt Parkway project to fulfill at least two major aims: to allow students in Public History to practice public history by developing a National Park Service-oriented public interpretive project; and to test DH Press’s compatibility with materials collected and processed for another digital project, Driving Through Time: The Digital Blue Ridge Parkway, a digital collection of Blue Ridge Parkway historical materials created and sustained by Dr. Whisnant and colleagues at the UNC Libraries. Using DH Press in a familiar (to many) WordPress environment in conjunction with Driving Through Time materials provided an accessible, flexible way for public history students to use primary sources to create and present new knowledge in ways that are not possible within the larger (and more technically complex) Driving Through Time environment. 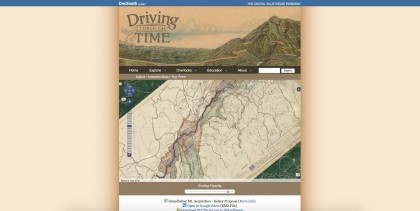 We invite you to take a virtual trip through the history of this beautiful 469-mile “elongated park.” Conceived during the depths of the Great Depression as part of Franklin D. Roosevelt’s New Deal and completed in 1987, the Parkway continues to evolve through its ever-changing relationships with surrounding communities, landowners, and the public. The park winds its way through 17 North Carolina and 12 Virginia counties, numerous communities, and countless different southern Appalachian landscapes. Its economic, social, and psychic impact on the region has been profound. Read a brief history of the Parkway here. 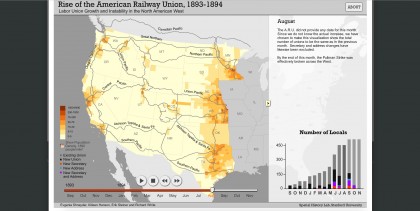 Books have historically been constrained by the limitations of print medium, and even digital books are usually just electronic replicas of bound volumes.  In response to these challenges, the Stanford University Spatial History Project has teamed up with Stanford Academic Technology Specialists in the Jasper Group and developers at Portland, Oregon-based Open Sourcery, to create an interactive medium for readers to access and explore Railroaded‘s collection of over 2,000 footnotes, links to sources, visualizations, and downloadable supporting data files. This dynamic format offers readers a new way to access, consider, and manipulate the volume’s material, while also allowing White and his team to continue to annotate footnote discourse and develop visualizations as analyses and insights evolve. 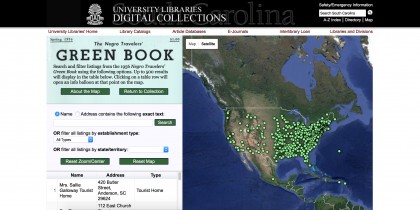 The Negro Travelers’ Green Book was a travel guide series published from 1936 to 1964 by Victor H. Green. It was intended to provide African American motorists and tourists with the information necessary to board, dine, and sightsee comfortably and safely during the era of segregation. The custom Google Map at right compiles placemarks for over 1500 listings from the Spring 1956 Green Book. A larger interactive map with search options is available on a separate page linked below. The original Green Book is also viewable and searchable as a digital object, and contains all of the Spring 1956 listings (including those that do not appear on the map). 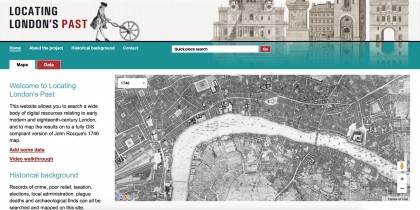 Building on a fully GIS compliant version of John Rocque’s 1746 map of London, this site allows you to relate an eighteenth-century representation of the metropolis to the first accurate OS map of London (1869-80), and to a modern Google Maps environment. Records of crime, poor relief, taxation, elections, local administration, plague deaths and archaeological finds can all be searched and mapped on this site.

Historians have only recently begun to consider sound, but their work is already reshaping our understanding of the past in significant ways. This new work has been accompanied by an ever-increasing number of historic sound recordings made easily available via the internet, and the opportunity to listen in on the past has never been greater.  But recorded sound presents new challenges as well as opportunities.  Of course any recording is highly mediated by layers of technology that must be accounted for, but a more fundamental challenge lies in the fact that, while people hear with their ears, they listen with their minds.  The best work in aural history is as much about listening as it is about sound, recovering the meaning of sound as well as the sound itself.  To recover that meaning we need to strive to enter the mindsets of the people who perceived those sounds, to undertake a historicized mode of listening that tunes modern ears to the pitch of the past.  The Roaring ‘Twenties website is dedicated to that challenge, attempting to recreate for its listeners not just the sound of the past but also its sonic culture.  It offers a sonic time machine; an interactive multimedia environment whereby site visitors can not just hear, but mindfully listen to, the noises of New York City in the late 1920s, a place and time defined by its din.

The Spatial History Project at Stanford University is a place for a collaborative community of scholars to engage in creative spatial, textual and visual analysis to further research in the humanities…Our projects operate outside of normal historical practice in five ways: they are collaborative, use visualization, depend on the use of computers, are open-ended, and have a conceptual focus on space. Our lab structure and culture is specifically designed to support the iterative nature of the spatial history research process where new questions and opportunities for further exploration frequently arise. We promote creative thinking and problem solving on the technical, conceptual, and intellectual challenges – from applying existing technology in new ways to developing custom tools and solutions. Our process begins by outlining initial research goals and objectives, and gathering and digitizing relevant data from archives, libraries, and organizations. We organize our data in geospatial databases to better facilitate the integration of spatial and nonspatial data, and then use visual analysis to help identify patterns and anomalies. Many of our visualizations are experimental and only a few eventually become final products. We embrace visualization as a way not simply to illustrate conclusions, but a means of doing research.