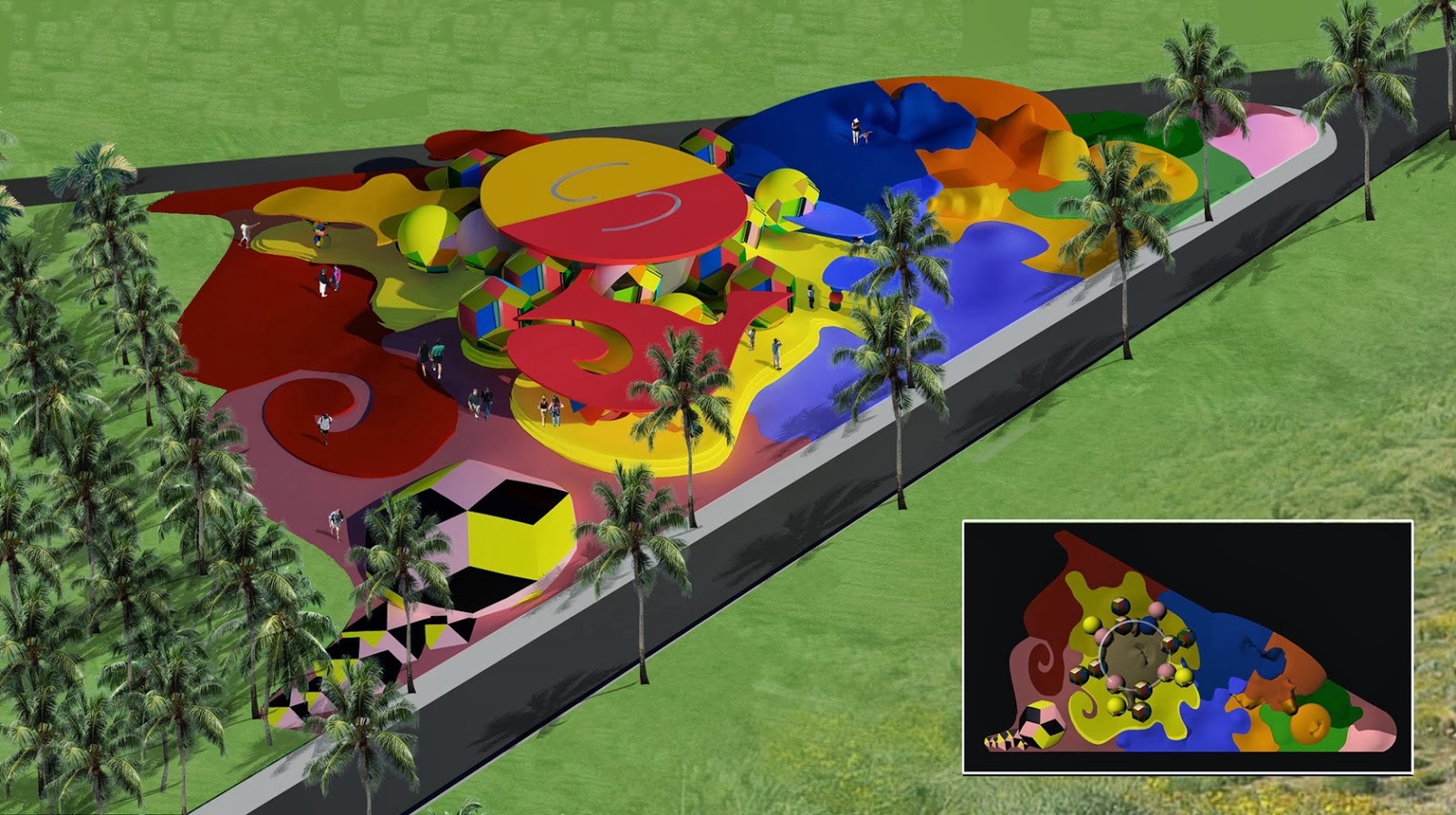 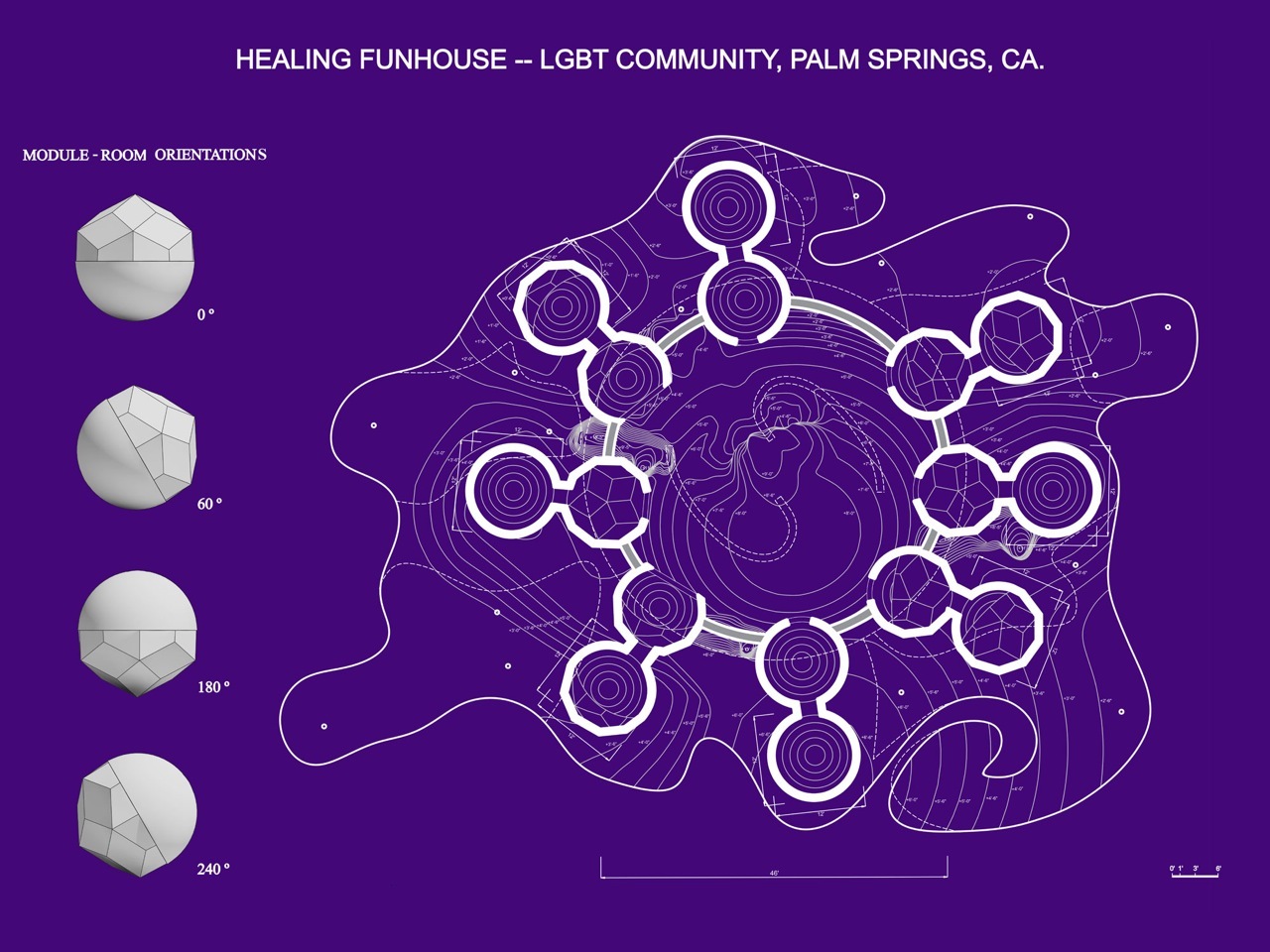 BOOM was a proposed queer eco-community in the desert of Rancho Mirage, CA, designed by 10 different influential contemporary architects. Planning began in 2010 with groundbreaking construction scheduled for 2012, however, the plans were met with resistance from community members and the project never formally pursued approval from the city government. BOOM, under the real estate firm BOOM Communities, Inc., united architects such as Diller Scofidio + Renfro, J. Mayer H., and LOT-EK to collaborate on a “culture-driven,” open-air, pedestrian-based shared living space – originally conceived as a retirement community – that would include around 300 residences across eight neighborhoods. This paper will focus on the proposed contribution from the late renowned architecture duo Arakawa & Gins, which was an experimental ‘playground’ named Healing Funhouse. Its name is informed by its function of combining values of physical vitality with queer concepts of “play” and community.

Healing Funhouse wedges into the angle formed by a forked road. The park isn’t walled off; instead, the straight lines of the sidewalks adjacent to the roads the Funhouse is wedged between bound off the area on two sides, while the organic shapes that create different areas on the ground of the park swirl into a grass field and are cut off by a thicket of palm trees. Due to the unfinished nature of the community, one can only speculate about what structures lie outside the boundaries of the plans, but the project included walking trails, an open-air market, swimming pools, restaurants, nightclubs, and a gym, as well as residential buildings – walking trails in particular seem a likely connection between Healing Funhouse and the rest of BOOM given its complex, busy design, spirit of exercise, and depiction in the middle of a grassy field.

The architecture of Healing Funhouse patchworks together two-dimensional curved, swirling forms and three-dimensional angled, geometric structures. The Module-Rooms make use of both types within one small structure – sphere-shaped with one half a tiled geodesic dome, the other half a smooth sphere. The Rooms connect to the ground at different angles, so some have the spherical side exposed upwards, others the geodesic dome side. Others are planted to the ground right along the middle of the two, exposing a portion of each. This hybrid of the languishingly organic and the strict, yet playful geometric encourages activities characterized as both exercise and relaxation, while also paralleling the community’s carefully designed, yet distinct areas designed by different architects.

A brightly colored, small artificial mountain range on one side and a sort of climbing wall made of cubic structures in the opposite corner flank the central umbrella structure. Different bright, saturated colors distinguish between these “areas.” Each swirled area on the ground is a different color – the area in the center, on which the central structure is planted, is highlighted in yellow, with adjacent blue, red, and pink areas. The central umbrella structure’s top is half red, half yellow, evenly bisected by a line dividing it into the two halves. Other structures are accented in green and orange, creating a whole rainbow – surely not an accident in an intentional LGBTQ community.

Few “playground” activities like slides and swings are within Healing Funhouse. Instead, it counts on visitors to make use of the varied geography of the space which invites climbing, relaxing, exploring, running, hiding. This concept of “park” encourages the whole BOOM  community’s emphasis on gay vitality and community-building, while also highlighting Arakawa & Gins’ preoccupation with health, death, and vitality. All the while, Healing Funhouse explores the notion of “play,” in particular in relation to queer spaces, while also turning on its head traditional ideas of the park as a “cruising” utopia for gay people.

I would situate Healing Funhouse in conversation with both Henri de Saint-Simon’s ideas of the “sick body” of the city and Charles Fourier’s theories of pleasure as both an ends and a means. Healing Funhouse is designed to heal – physically, by encouraging activity and exercise; culturally, by providing an outdoor “adult playground” type of gathering space and fostering a sense of community. But it is also pleasurable – it is a “Funhouse.” And ultimately, this pursuit of pleasure is what is asserted to encourage the use of Healing Funhouse as a place for physical exercise – ultimately, making a body healthier (and so, more receptive to pleasure). In this way, it is based in pleasure as an organizing principle – inciting pleasure and the rest will organize itself, à la Fourier’s The System of Passionate Attraction.

In closing, things I am wondering about – how can engaging with a shaped environment be encouraged as a form of entertainment? How can people be encouraged to pursue their own physical vitality? How can we conceive of parks that serve specific functions, as opposed to being appropriated for various purposes? I think a deeper investigation into late-20th century public park-cruising culture would be particularly fruitful in exploring these concepts. I’m also curious about the obstacles in designing a community with purposely-disparately-designed parts that are assumed to somehow create a “whole,” as well as the logistic practicality of such a concept as a huge, isolated queer community that also employs ten different architects and would cost an estimated $350 million.