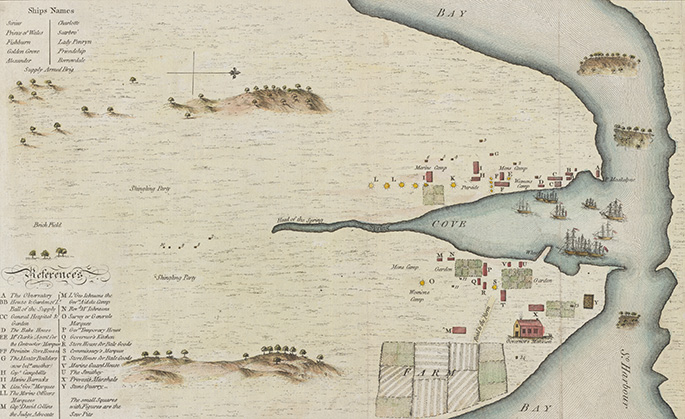 “Sketch & description of the settlement at Sydney Cove Port Jackson in the county of Cumberland taken by a transported convict on the 16th of April, 1788, which was not quite three months after Commodore Phillip’s Landing there.”

The penal colonies in New South Wales during the eighteenth century pushed the boundaries of lawlessness within punishment. In 1785, after the American Revolution abolished shipments of convicts to North American colonies, the British House of Commons discovered Botany Bay as an opportunistic settlement to enable the continuation of utilizing exile as legal punishment. They planned to ship convicts to the island to manage crops and livestock, govern themselves, only to be checked in on occasionally. The legality of Botany Bay was a logistical nightmare, as the convicts were barred from serving on a jury, thus any criminal trials occurring on the island were operating under an improvised system. This colony exemplifies one of several penal colonies that operated entirely outside of legal bounds, taking the law into their own hands, and often treating convicts as slaves.

The National Museum of Australia provides a map of the penal colony that was located in Botany Bay in New South Wales. It is significant to note that it was one of the “convicts” who created this map in 1788; thus, the perspective is one of captivity and forced exile. With the initial examination, we see the farm, all of the houses and labeled sections, as well as the writing recurring throughout the map. Additionally, the spatial relationship between the water and the land presents itself as very separate, using the water as a boundary; the form of the water takes on an animalistic shape, perhaps meant to embody the treatment of the captives. The cropping choice, the exclusion of the most of the bay, as well as the land opposite the penal colonies across the water, begs the question, why did they choose to portray mostly land over water, when the penal colony is only a concentrated minority of that land presented? Inside of the piece of the bay they do include, there are ten ships sailing into the cove, as well as three small islands. The islands are no more than patches of land with a few trees circumventing the space. A similar fleuron is depicted throughout the space, with the addition of texture to denote hills in the landscape.

The map includes a “References” section that provides a key, matching the letters on the map to their function, allowing for further understanding of the space. One of note is the letter M, which is labeled as, “Captain David Collins the Judge Advocate.” In its historical significance, David Collins kept a journal that Jeremy Bentham utilized as his main source for his writings on the penal colonies. There are two different labels for M, and it appears twice on the map. Therefore, Collins’ M is either directly above the farm, or directly below the word “cove.” The Governor’s Mansion is the only building depicted with three dimensional detail. It is proportionally exceptionally large, and intriguingly located directly above the farm. The inclusion of such detail clearly expresses the Governor’s position of power and authority over the convicts, portraying a hierarchic structure.

There is another segment of text in the top right hand corner that includes names of the ships used to transport these convicts; there are ten names, just as there are ten ships depicted in the bay. Keeping in mind that this map was drawn by one of the convicts transported, it is interesting that the convicts would know the names of the ships used to transport them to the island. Apart from the two lists we are given, other labels written on the map include: “Men’s Camp,” “Women’s Camp,” “Parade,” “Marine Camp,” “Road to the Farm,” “Governor’s Mansion,” “Garden,” “Head of the Spring,” “Bay,” “Cove,” “So. Harbor,” “Shingling Party,” “Brick Field,” “P Maskelyne,” and, “Wharf.” There are also numbers used as labels throughout the map, with no key or indication for the numeric values. Of these labels, the men and women’s camps are the most fascinating, because in reading about the penal colonies, gender is never mentioned. The two are directly next to each other, and there are two sets— one on each side of the cove. Their close proximity leads one to assume that there was co-mingling between the sexes.

The depiction of the Botany Bay penal colony is visually reminiscent of Jameson Wegner, and conceptually of Michel Foucault. Jameson Wegner’s discussion of boundaries ties into the penal colony, relating particularly to the map’s use of spatial relationships. For Wegner, the utopian impulse manifests itself in a built environment, and through social reforms. Wegner addresses how boundaries are articulated, and examines how they become a spatial metaphor and a mechanism for division. In the map of Botany Bay, we see the clear division between land and sea, whereas most maps depict the sea as more grand and expansive than land, Botany Bay includes more land, using the sea only to express the boundaries to which the convicts were confined.

This topic opens an immense amount of research possibilities. Jeremy Bentham critiques the unconstitutionality of penal colonies, this exemplifies the aspect of penal colonies that is left unanswered through the visual analysis. Lauren Benton’s writes, “Bentham’s professional and personal stake in the panopticon scheme in England framed his criticism of New South Wales and focused his attention, especially in two earlier tracts, on the inability of a distant penal colony to serve as a deterrent for criminals in England, the greater costs of transportation compared to imprisonment in England, and the inevitable failure of convict discipline or reform in a distant penal settlement.” This dialogue between Foucault and Bentham of dystopian discourse as it relates to the legality of penal colonies, is precisely the avenue I seek to develop through future research.

2. Sketch & Description of the Settlement at Sydney Cove Port Jackson in the County

3. Wegner, Phillip E. “Genre and the Spatial Histories of Modernity.” In

4. Foucault, Michel. “Des Espace Autres” [Of Other Spaces: Utopias and 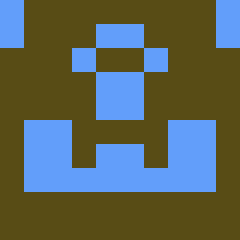 View all posts by Stella Frank
Skip back to main navigation