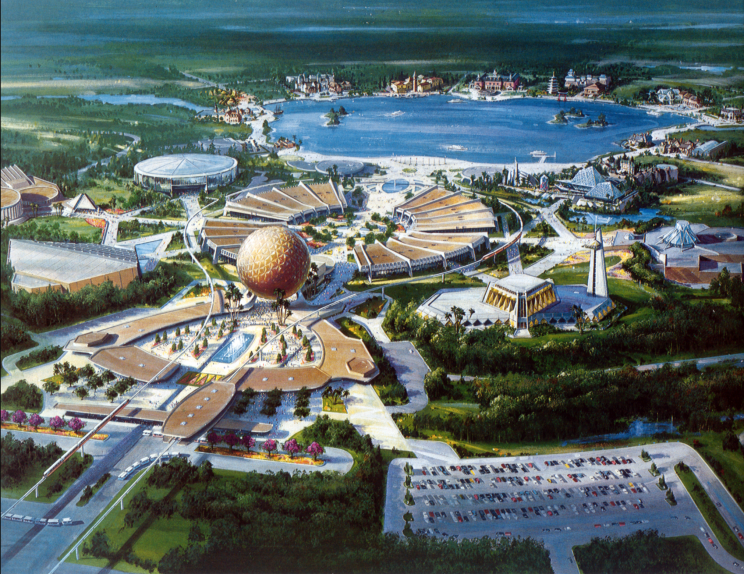 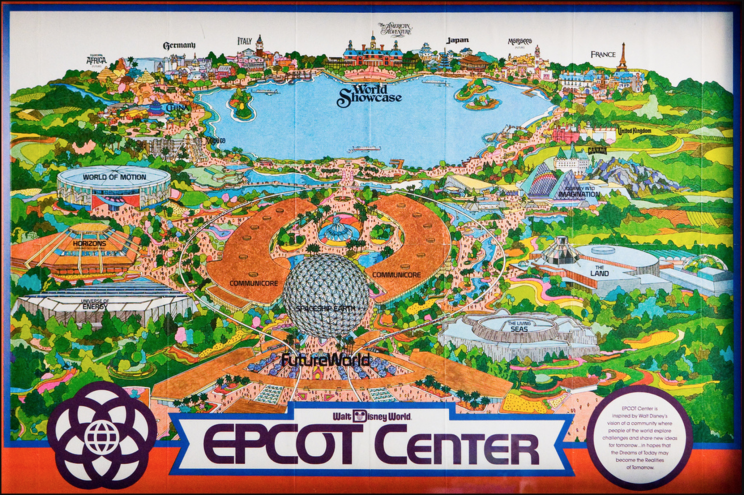 Just right of the center of Disneyworld’s expansive grounds in Orlando, FL sits an immense reflective sphere, textured like a golf ball, and held up by four metal pillars. This enormous orb, which appears on park maps as Spaceship Earth, functions as the emblem of Disney’s Epcot Center, an elaborate reconstruction of many of the most iconic landmarks of Earth’s major cities and countries, and one of the most well-renowned theme park attractions on the planet. Walt Disney himself envisioned Epcot as a perfected cosmopolitan environment, where the world’s disparate cultures and monuments, coupled with bleeding-edge technological innovations, would produce harmony in an environment and between people. Disney presumed that such a space would pull together people from across the United States and the rest of the world, and hoped that eventually Epcot could transcend being simply a theme park attraction, and become instead a functional, balanced, and unified Utopian residential area. By exploring the Epcot Monorail, an above-ground train with a horseshoe track assembled around Spaceship Earth, and the way it inflects a viewer’s experience of the larger park, it becomes clear how the Epcot Center articulates its utopian vision of bringing together people from distinct backgrounds in a space that serves as a landmark both to cultural diversity and human ambition.

From looking at a concept map and mock-up design artwork of the Epcot center, a viewer understands quickly the scope of Disney’s ambitions and how Disney Imagineers (the title given by Disney to its theme park designers) attempted to implement into physical space lofty ideas about society and human connection. A concept painting of the park from 1980 (included on the final page in this paper) depicts Epcot’s circular plan. The concept artist here shows the park’s front centralized around two symmetrical, glass-lined buildings with metallic gold roofs, portrayed like butterfly wings, that form a pavilion for guests, and that house a garden between their two wings. At the front of these two glass-edged wings lies Spaceship Earth, shining, pristine, and commanding in the concept design, in which the artist paints gleaming beams of light shining off of the grand metal ball’s dome. A metal rail system runs along the perimeter of this central pavilion, darting out at different ends of the park’s entrance and running parallel above the rotary that functions as an entrance for a golf-cart shuttle.

This rotary, a broad concourse where golf-cart trams shuttle in theme park visitors, lined with tall pines and palm trees, and with pillars of cherry trees that run through its center, functions as an Epcot goer’s first introduction to the park. This diverse selection of plants, plucked from disparate climates and associated strongly with distinct global geographies, create for a Disneyworld visitor an awareness that the space into which they are about to enter is one divorced from typical expectations for a manmade environment, allowing for the coalescence of natural environments that normally exist wholly independently from one another into an ecological harmony. By using such a spread of different types of trees, some deciduous, some evergreen, the Disney Imagineers who designed Epcot suggest that the park as a space cultivates diverse harmony in nature, yet the design of this rotary-tram terminal, because of how deliberately the Imagineers arranged these plants into an ordered structure, one where the flowered plants populate the dividers between tram lanes, and the wooded space surrounding the rotary features taller, leafier trees, reasserts to a person entering the park the manmade nature of the entire attraction. Spaceship Earth lies at the center of the vantage point provided to a viewer arriving at the rotary, and the start and end points of the Epcot Monorail sit above the drop-off point.

The Epcot Monorail, an Iconic feature of the Disney Park, operates atop a semi-circular aboveground track, and offers visitors of Epcot a view of the park’s front and rear attractions. While riding the Monorail, a viewer passes by each of the buildings included in Epcot: The Universe of Energy, a sharp-edged monolithic pentagonal building, lined in the front with metal and in the back with glass, and reminiscent of Brutalism; Horizons, a pyramid-like building made of brown material, with two of its three stories surrounded by floor-to-ceiling windows, tapered towards the flattened roof of the building, an exposed area that functions as a veranda for guests to take in the park’s many (Horizons’ design reminds a viewer of a spaceship, and seems inspired by those designs of extraterrestrial space crafts that appear on the covers of early twentieth-century science fiction novels); The World of Motion, a cylindrical, high-ceilinged one-story building, almost like a circus tent, made entirely of glass, with an enormous exposed entryway, from which everything inside this particular building can be seen; the Journey into Imagination, a complex of different pyramidal glass structures, a teal and marble castle, and a fake mountain range with an exposed metal skeleton, covered in lilacs, lilies, and lavender, as well as pines; The Living Seas, a complex of different pods, each styled to resemble a glacier, with glass roves that feature stained glass patterns of rainbows and oceanic scenes, surrounded by metal walls etched and textured to resemble trickling water. Imagineers designed the Epcot Monorail with the clear intent to provide park visitors not with a thorough introduction to the technology-focused buildings that sit at the park’s front, but instead to grant viewers with a moving vantage point from which they may take in the World Showcase, a manmade lake that takes up the majority of the park’s rear, along whose shore sit a collection of different reconstructions of iconic cities from across the globe. The park’s monorail system, by design, supplies to an attendee of the Epcot center with an awareness of the park as being a synthesis of human culture.

By providing a visitor with a survey of buildings influenced by contemporary trends in design and architecture that glorify and make iconic developments in human technology and scientific understanding, and that serve as a testament to human curiosity and imagination, while also supplying them with a view of many different old-world architectural icons, like the Eiffel Tower, and an exact replica of the Rabat Necropolis in Morocco, the Epcot monorail creates within the viewer a sense of being a part of the broader community of the Epcot park, as being a member of a larger class of thinking and experiencing human individuals unified by the contributions made by the species as a whole to the world. Epcot’s World Showcase, by bringing together so many disparate cultures along the banks of one body of water, and by being planned on a circular layout, functions as a microcosm for the human-inhabited world. Epcot, then serves as a way of indoctrinating a person into believing in a unified global society, one where the manmade structures, cultures, and technologies across the globe intermesh humans together as having one shared system of experience. Epcot, as a manufactured representation of this intermingling between cultures and technologies, serves as a testament to the truth-value behind the deeply American sense of human identity that motivated its creation.

Imagineers and Disneyworld’s financial board zoned Epcot as a low-income housing development, and though they applied for that zoning likely for tax purposes, the classification of the park by Florida’ government as a residential space suggests that Epcot, at some point in time, was created with the intention of functioning as an actual community in which people lived, worked, and coexisted. Epcot, then, can be seen as an attempt to create a lived-in Utopia, one that likely would have function much in the same manner as Charles Fourier’s proposed Phalanstery, or the Oneida community Spearheaded John Humphrey Noyes, wherein the special considerations given to those communities’ designs inform and facilitate the manner in which individuals are to behave as part of a broader society. Fourier, for example, proposes how, using the senses fundamental to human experience, the members of the Phalanstery will acknowledge the achievements of people operating in wholly distinct fields, and will reward those individuals financially, writing in his The System of Passionate Attraction[1] that:

Every Phalanstery draws up annually by majority vote a list of the inventions or compositions which have appeared in the preceding twelve months and which have come to its notice. Each of these items is judged by the competent series—a tragedy, by the Series on literature and poetry, and so with all the new creations (Fourier 315).

Fourier here articulates a method of evaluating individual contributions—contributions pertinent to particular fields of work, and to particular Phalansteries—that bear importance to the broader network of people in the world, living in Phalansteries through qualities of the work that can be assessed or ascertained through the sense, thereby rendering the works universalizing or generally significant to the broader population of people. This proposal of contribution made by an individual but relevant to a broader network strikes the reader as similar to the impulse on the part of Disney Imagineers to organize a physical space that treats the contributions to science and to culture of individuals or cultures with disparate backgrounds. Epcot’s design implements a system of appraising different elements of human experience and human contribution that, through their acknowledgment in space and special articulation, presents to people their importance and their implicit power to connect people from disparate backgrounds. The Oneida community’s emphasis on facilitating polyamorous relationships where community members feel no one particular sexual or romantic connection to a other single individual functions similarly to Epcot’s emphasis on facilitating a multicultural environment where an individual does not feel a singular attachment to any of the distinct cultures or ideological movements represented within the theme park. Unlike these two utopias, however, which exist to reinvent the systems of labor and romantic relationships between people, as well as the manner in which spirituality is practiced and experienced by a community, Disneyworld’s monetization of the Epcot Center as a tourist attraction first and foremost thrusts the theme park into a unique category of Utopia; Epcot, unlike other utopias explored in this paper, exists as a project in commercial utopia building, where the utopian qualities of the space render the Epcot Center a spectacle, one that is to be observed because of its attempt to synthesize together culture and technology in a way that feels distinct from the world outside of the theme park.

Exploring Epcot in the broader context of Disneyworld as a park, defining more exactly and rigidly the idea of a commercial utopia, and tracking changes in the philosophies and beliefs held by Epcot’s designers between when it was first conceived of and its current position as one of Disneyworld’s most iconic attractions would supply a greater understanding of Epcot’s particular position as a utopian project. Louis Marin’s Utopic Degeneration: Disneyland would likely address many of these elements of the Epcot Center’s utopian qualities as, though the essay deals with Disneyland, and not Disneyworld, as a failed utopia, its investigation of a theme park, one containing branded properties and designed and operated with clear beliefs about how society and the consumer behave, would likely provide more concrete definitions and would indicate which avenues to travel down in further exploring the complex intellectual and structural histories of the Epcot Center as a utopia. Looking at Walt Disney’ work addressing fascism during World War II would bring to the foreground the cultural considerations Disney had in mind when suggesting Epcot be created.

[1] Fourier, Charles, The System of Passionate Attraction, as contained in French Utopias: an Anthology of Ideal Societies, eds. Frank E Manuel and Fritzie P. Manuel (New York: Free Press, 1966). All citations will be made in-text and will feature line numbers. 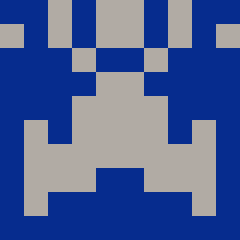 1 thought on “Experimental Prototype City of Tomorrow: Disneyworld’s Epcot Center as a Utopian Failure and a Commercial Success”