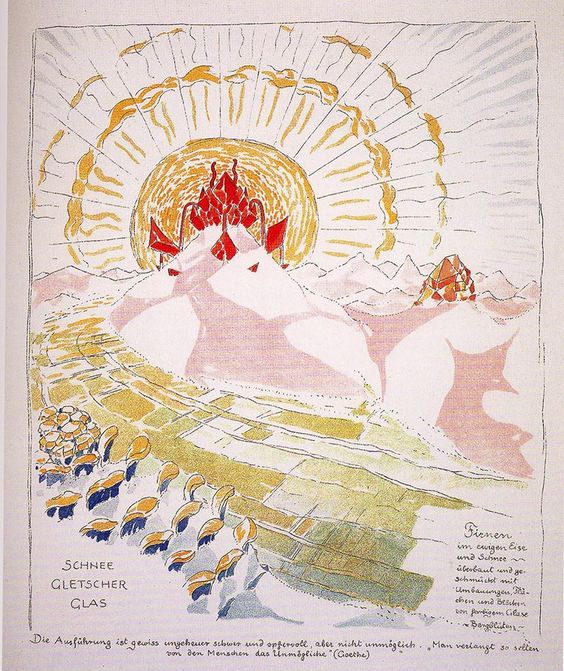 Bruno Taut’s Utopian plan is presented in color on a two dimensional plane. The portrayal of the city is of lesser importance as nature dominates the scene: the sea, mountains and the sun are shown as the center of attention. The city plan is depicted in an extremely a rural scenery. The viewer cannot see any buildings, churches or man-made creations except for geometrically curated agricultural fields. The perspective is at bird’s eye view so that everything is observed from a great distance, giving the viewer an outsider feeling of the city. Taut’s work is about a collaboration between artificial and natural. The viewer can see the attempt Taut made to create a space of harmony between the artificial and the natural but rather than resisting it, the city reaps the benefits from joining forces with such a powerful resource: nature.

The composition of the piece is centralized on the city but the sun and the mountains occupy most of the background. A moving ocean is in the foreground followed by an arch of agricultural planes who are the core of the piece. The man-made agricultural fields give the impression of drifting off behind the mountains while on their sides are surrounded by organic forms and the natural. The layout is divided in three different parts: the foreground, the city and the background. Taut guides the viewer’s prospective by having the city intermix with it’s foreground and background introducing it’s utopian proposal; the dissolution of cities. The use of color in his piece is extremely important; Taut used yellow to fill the background with light, the red and pink in the mountains depicts volume but also an inviting quality to the land. Taut wanted to show a Utopia, where the skies are clear and sunny and the mountains are pink and grandiose. The ocean has yellow reflections from the light of the sun and an intense blue to depict the health of the earth.The agricultural fields are filled with colors, ranging from green to yellow, showing health, perfection and the ideal utopia. Taut wanted to transmit through the use of colors and forms a healthy place, which was ideal for living, a space that was going to be successful and heavily like.

Taut wanted to dissolve the idea of cities and encourage rural cooperation. Taut did not want urban cities or artificiality to take over city planning but rather show how beneficial it would be for communities to interact and coexist with nature. Taut made thirty prints describing his ideal city plans and he captioned one with the following: “Town and country no longer exist. There is no more war and peace. One knows no abstractions which give one power over life, work, good fortune and health. Mutual interests emerge from the natural fellowship of doing and living, and create their own organizations for protection and exchange, for further development and education.” Taut wished for smaller communities and rural societies. The space he longed for would have no hierarchies of race, class or gender but rather have a complete acceptance of  everyone’s nature and the concept of working for a living. Taut’s Schnee Glitscher Glas represented an agricultural life where people worked, yet rejected urbanism. This plan was certainly countercultural for the time it was made in, as the idea of eradicating cities was not of common belief especially amongst architects.

Taut believed in the development of education, creating organizations and fellowships through natural living; in Robert Owen’s  book of the New Moral World a similar concept is shared. Robert Owen said: “No man has the right to require another man to do for him, what he will not do for that man; or, in other words all men, by nature, have equal rights.” Though Owen’s main theme was built around education and self betterment, he also believed in building communities based on equality. Taut’s space could be ideal for the community Owen idealized. The harmonious collaboration with nature could give community members the chance to peacefully enquire study, excel in physical labors through working the fields and be only exposed to the truth through nature’s sometimes brutal reality. Taut was adamant in creating “utopian” plans and envisioned a life with nature. Though if Bruno Taut’s idea of a Utopian city was to eradicate the concept of cities what would his communities stand for? 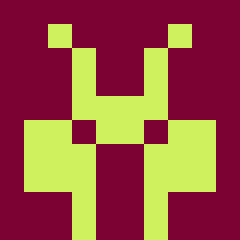 View all posts by Vittoria Ciaraldi
Skip back to main navigation